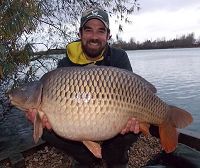 With a big 32 acres of water to fish this long, open, reed fringed lake has become very popular as a day ticket water and like all our other waters there is no limit to the time an angler can stay.

We now believe that the water holds at least 30 different mirrors in excess of thirty pounds. The biggest of these has been caught at 42lb and is the lake record. Weights on the water continue to rise and multiple catches are commonplace. We at Linear are confident that the water, under our careful management, will become even more popular in the future. The large head of carp this water contains continues to produce some stunning results with at least 45% of its estimated 1,900 stock believed to weigh in excess of twenty pounds and a majority of the remainder now being upper doubles, Brasenose One continues to provide great sport for the visiting angler.

There are tracks around most of the lake and parking in many places is within easy walking distance of most swims.

Following on from our last semi-finals at Linear Fisheries and what was expected to be some good fishing conditions we were all bracing ourselves for a busy and exciting match on both B1 and B2 and believe me we were not disappointed.

The tension amongst the anglers at the draw was obvious and all were hoping to catch well and secure their place at Wraysbury.

It wasn’t long after the midday hooter for the first 2 fish to grace the banks.  B1 and B2 both producing their first fish at around 1pm.  The honor of 1st fish on B1 went to Peg 11 Matthew Whittaker and Lee Sustans (Team Mainline RAF) with a 15lb 12oz Mirror.  B2’s 1st fish went to Peg 8 Karl Palmer and Callum Gutteridge with a 19lb 11oz Mirror.

Heading into Friday night Wayne & Ryan had set themselves up with a comfortable lead of 302lb 07oz.  Ed & Chris were holding onto 2nd place on 31lb 11oz and with very little weight difference in 3rd place was Cliff and Karl on 30lb 04oz. 4th place was taken by Kevin & Luke on 29lbs 12oz.

During Saturday B1 surprised no-one with the lake producing a fantastic amount of fish and even with the change in weather it continued to produce.  Unfortunately for the majority of anglers the fish seemed to prefer only a small number of swims.

Excitement was building around Wayne and Ryan who had set themselves an additional personal challenge of 1000lbs and were getting very close to this with a weight of 906lbs 11oz going into the night.

By Sunday morning is was a given that Wayne and Ryan would take 1st place and secure their chance at the Finals at Wraysbury.  They also earnt the respect of all the anglers and marshalls when they not only hit the 1000 but exceeded all expectations and finished with a fantastic weight of 1089lbs and 4oz.

Kevin Grout and Luke Church (Team CarTalk) continued to haul fish throughout the morning and landed their last fish on the hooter thus securing their 2nd place with 29 fish weighing in at 560lbs 05oz.

Ed McDermott and Chris Thomson (Peg 13) continued to battle to the end and finished in third place with 17 fish and a total of 294lbs 4oz.

Despite his partner Toby Simpson having to leave Saturday night for pre-booked holidays Len Seward continued through the night and into Sunday morning and successfully held on to 4th place with 9 fish weighing 170lbs 03oz.