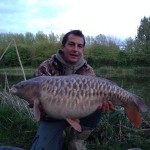 We are delighted to be back at this fantastic Kent water which has produced some stunning fish for us in previous years! Not an easy water but put the effort in and you will be rewarded with some absolutly cracking fish!

It was a quiet start to the match here at Cottington with anglers enjoying the glimpses of sun whilst watching the water. The match was kicked off at 7:30pm on Friday evening with a stunning 33lb 12oz Mirror from Damien Watts and George Eade in peg 10. This was swiftly followed by another four fish being hooked, Peg 5’s Ricky Eason and Paul Okendon netting a 31lb 10oz Mirror and two in quick succession from Peg 9’s Tom Duncan Dunlop and Michael Mack. The final fish of the day was a whopper from Peg 8’s Colin Durman and Robert Hards, landing themselves the biggest fish of the competition, weighing in at 37lb 12oz!

Saturday morning started early and stayed at a consistent pace with a fish coming out every couple of hours. Peg 2’s Kieran Ryder and Keith Hearne got themselves off the mark in the early hours of Saturday bagging a lovely 28lb 07oz Common. Next on the scoreboard was Peg 1’s Paul Gordon and Vernon Kearl with a chunk of a Mirror coming in at 36lb 07oz, but this was only the start for these guys as by 6:30pm Saturday night they had netted another 3 fish putting them solidly in 1st place with a 49lb lead on 2nd place.

Also getting themselves in the run on Saturday afternoon was Peg 4, David Beach and Andy Phillips netting yet another Cottington 30! This was shortly followed by Peg 13’s Dan West and James Rintoul landing an impressive 32lb 10oz Mirror.

Day two of the competition was closed off by Peg 9’s Tom and Michael at midnight when they got their 3rd fish of the match moving them up the leader board into 2nd place above Peg 10’s Damien and George!  This position was solidified when they grabbed their 4th fish at 5:30am Sunday morning!

At 6:30am Sunday morning another pair got on the scoreboard with a modest 19lb 13oz Mirror from Peg 3’s Chris Purssey and Martin Reeves.

The remaining 5 hours of the match were some nail biting ones, especially for those in the 2nd and 3rd, as only 34lbs separated 2nd from 8th and anyone who knows Cottington knows that that is very easily one fish!

As the last 30 minutes ticked by, painfully slowly, you could feel the tension coming out of Pegs 9 and 10 as they eagerly listened for any hint of a bite alarm across the lake. When the final hooter sounded at 12 noon on Sunday you could visibly see the relief wash over them.