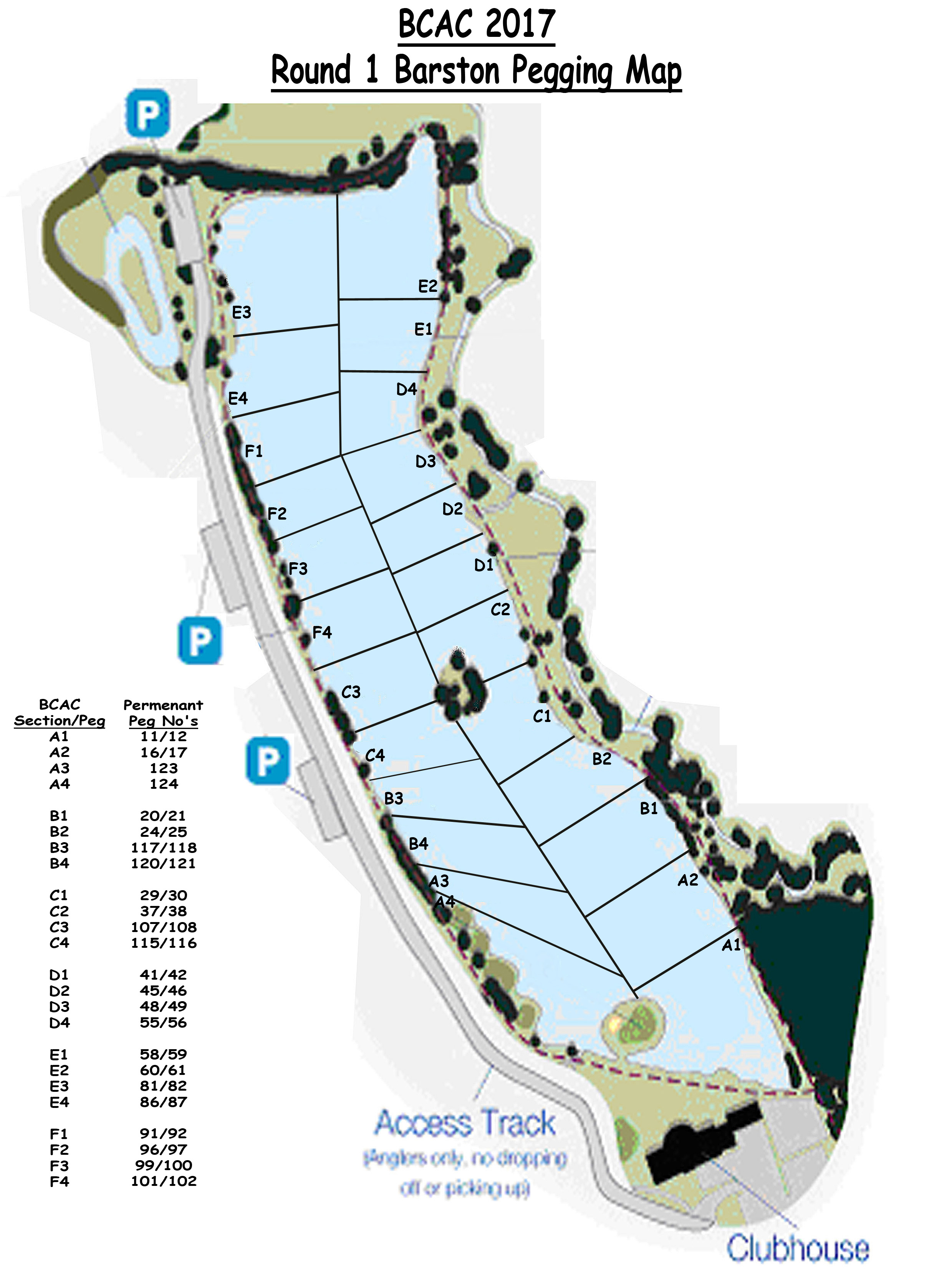 Returning to the BCAC is Barston Lakes is an all round Fishing venue at the West Midlands Golf Club in Solihull, between Coventry, Birmingham, Leamington and Warwick.  We have the 124 peg, 25 acre Barston Lake which holds Carp to 37lb. Anglers are allowed to use the golf clubhouse which means we have some of the best catering facilities located at a fishery in the country.  There is a bar open from 7am,  food available during daylight hours to eat in or take away, and toilets and showers available.

The 2017 Championships kicked off with a Super Eliminator at Barston Lakes. 20 pairs of intrepid anglers braved the wet and windy conditions to take their first step on their journey to become 2017 British Champions.

The events at Barston are a very different affair from most carp matches. The lake is split into 6 sections with one pair qualifying from each. This is done because the lake varies in the numbers of fish caught over its length, it also makes the draw a very tactical affair. Anglers not only need to decide what type of match they want, 48hrs of frantic fishing or a slightly more sedate weekend, but also as the draw progresses they may be able to avoid anglers they don’t want to fish against.

The first two pairs out of the draw, the Woodstock brothers and Fern and Winsbury, decided they were hoping for a busy weekend as they went for pegs A1 and A4, the pegs around the 18th green.

Third out were the Greening brothers who opted for B1, where they were expecting to put their skills to the test and land lots of fish.

Another “flying peg” E2 was taken by Roberts and Perkins who were fourth out.

On this occasion, there were 24 pegs available for 20 pairs so there were going to be vacant swims. As the draw progressed pegs all over the lake were chosen but as we approached the end of the draw it became clear that the Greening bothers were being avoided as they were the only pair in B section. Last pair out, Ste Alford and Dean Crust, decided that they fancied a 50/50 chance of qualifying and so went  head to head with Brad and Rob by taking B4, directly opposite them.

As is usual at Barston fish started showing as soon as the lines hit the water, by the first weigh in all sections had fish but it was only Sean Dulson and Lee Simms in C1 that were really on the fish with 109lb.

B section was also starting to pick up with Ste and Dean just edging in front of Brad and Rob.

By the evening on day 1 A section was turning into a tight match with only 11lbs separating 1st and 3rd.  In B section Ste and Dean were still just in front of the Greenings, C section still had Sean and Lee with a commanding lead with fish obviously holding only on one section of the island. It was all still to play for in D and F sections by virtue of not many fish coming out and in E section a great match was developing between Steve Blow and Jack Funnel in E1 and Andrew Roberts and Nathan Perkins in E2.

Overnight A section saw some significant change with Wesley Prestage and Tim Hickinbottom in A4 pushing into small lead over Micheal Freeman and Andy Bradshaw in A3, both pairs opening a lead over the others in A.

In B section Ste and Dean had extended their lead to nearly 100lb over the Greenings, Sean and Lee were starting to run away with it in C section. D section was still really tight with only 8 fish out to the 3 pairs and in F Daniel Abbasian and Steven Hackers had moved slightly ahead but by only 30lbs so a very slim lead.

E section was still really tight Steve and Jack in E1 still hanging onto the lead by 10lb.

By lunch on Day 2 there was little change in the overall standings as the fishing shut down a bit on the cold wind.

As we headed into the final night A section looked like a straight fight between A4 and A3 , in B section was getting tight again with the Greenings gaining a little ground, C section was looking like it was sorted, D section still only had seen 8 fish so all to play for, in E section a battle royal was underway with only Blow and Funnel only 4lbs behind Roberts and Perkins and F section had only seen a few fish so F3 still had a slim lead.

At the final whistle at 9am there had been some hard fishing overnight.

In A section Wesley Prestage and Tim Hickinbottom in A4 held onto their lead.

B section saw Ste Alford and Dean Crust hang on despite the Greenings reducing their lead from 70lb to 30lb.

In C section Sean Dulson and Lee Simms had led from the start and ended with the highest total weight of the match at 473lb from C1.

In D was tight to the end with Bob Anderson and Adam Highly scrapping through by 10lb.