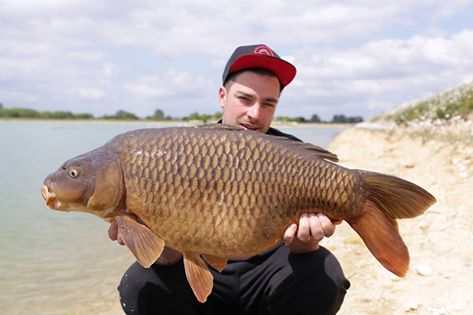 Set in the heart of rural Essex countryside just outside Fyfield near Ongar is Berners Hall Fishery. The Resevoir has 24 designated swims on 24 acres of water. The depth of water does vary throughout the year but generally the deepest points are approx. 14-15 feet with a clay based bottom. Short, medium and long-range methods all work depending on which swims, weed beds and the time of year. The lake has been carefully stocked with over 500 hand-selected carp & 15 catfish from some of the UK’s best-known fish dealers. The largest resident carp “Rambo” tips the scales round to 43lb+ with several of back up 30’s to go after as well.

We were off to a flying start to the match with the 1st fish landed by peg 1 Frank & Anthony Etheridge, which lead the way forward to a total of 6 fish caught the first day. Jon Neave & Ian Spraggs in peg 2 were in first place going into the first night with 25lb 1oz but they were closely followed by Jason Verney & Glenn Beardshall in peg 6 who were on 22kb 13oz.

The action started again Saturday morning at 7am after an uneventful night. The rain clouds had moved over and it looked like we were in for a few showers which seemed to switch the fish on. Jason & Glenn took pole position with another fish moving them onto 31lb 6oz, also a few more pegs getting off the mark.

By lunchtime Simon Wheeler & Mark Sawyer were into their 4th fish from peg 7 putting them into 1st on 42lb 8oz. But it wasn’t for long as Jason & Glenn had a nice brace taking them onto 50lb 2oz, it was starting to become a bit of a two-horse race!

By 6pm Mark Renwick & Ben Howes in peg 5 were off the mark, their first fish being a cracking 28lb 14oz common, moving them into 3rd.

Saturday night was very rewarding to Mark & Ben as they banked anther two fish of 28lb and 18lb moving them into 1st, although it was only for a couple of hours as Jason & Glenn regained their position with only two hours remaining!

With a few other pairs catching up the leaders it seemed like it all might change again, but it wasn’t to be, the top three stayed as they were up until the end.